I loved Monster Trucks as a kid and watched them every week, with USA-1 being my favorite truck.  I own a die cast of the truck today.  Later I became a big fan of Gravedigger watching the USHRA.  Even though Bigfoot was the first and one of the most popular Monster Trucks I was never a huge fan, probably because it was not a part of the USHRA so I didn't see the truck on a weekly basis.

I went to my first Monster Truck show in 2000 at the Cumberland County Civic Center.  Back then when USHRA ran small indoor arenas like this they called it the Thunder Nationals tour.   The floor is basically the size of a Hockey rink so what they can do is limited, but it's still impressive.  I don't have pictures from the show that I can find and the only trucks I can remember on the show was Sting and Blue Thunder.

After that was a couple times at Wiscasset Speedway a few trucks did some stuff on the infield between races.  Then I went to a few USHRA outside at Speedway 95 in Hampden and these were the best shows that I went to. 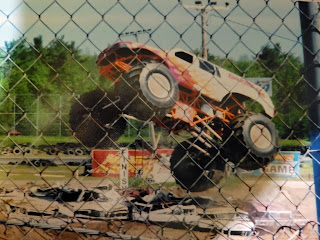 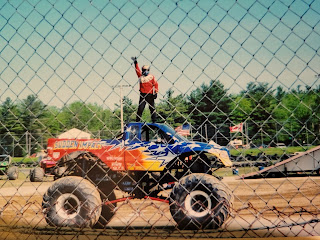 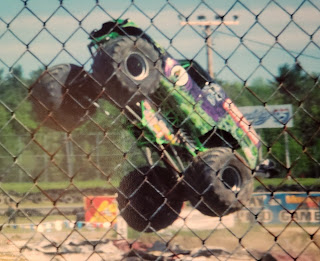 On the Bigfoot side of things I did see it displayed a couple times once in Florida in 2002 at the then Race Rock Cafe.  This truck featured 10 foot tires.  I saw a standard Bigfoot truck on display in 2004 at New England Battery & Tire in Vassalboro, Maine.  My last show was in April 2016 at the Colisee in Lewiston and I got to see Bigfoot in action that night. 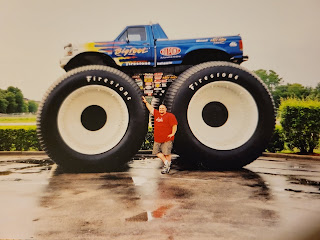 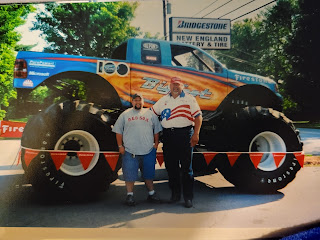 It's hard for me to believe that 15 years have passed since the last time I went to a rally.  It's not because I didn't want to, but life and things like work and other plans seemed to constantly interfere.  I really want to go to one of those huge out door USHRA Monster Jam shows with all the big names drivers like at Gillette Stadium.

I'm going to post more about my former monster truck adventures in the future.  Honestly though I have wrestler Perry Von Vicious to thank, his love of the sport has rekindled my fire!

I have not been maintaining this blog, and that's okay.  I have been so very busy ever since I got the promotion to the Operations Managers position.  I'm busy all day at work, I'm working late a lot, then when I get home I just don't have time or the energy to sit down and type.  I know that sounds absurd, but it's the truth.
Even now I decided to finally write something and I'm a paragraph in and I've already lost interest.
Posted by Michael J. Labbe at 3:30 PM 1 comment:

Mystic Pizza - Classic flick that launched Julia Roberts, not as good as I recall

The Suicide Squad - I enjoyed the HELL out of this!

Friday the 13th Part IV: The Final Chapter - The movie where Jason dies

Friday the 13th Part VI: Jason Lives - My favorite of the franchise, the one where he is resurrected for the first time.

Wild Hearts Can't Be Broken - Disney movie from the 1991 that my wife loved and we finally found on DVD. I enjoyed it, true story of a lady that dove horses off a high dive into a pool

Posted by Michael J. Labbe at 3:30 PM No comments:

Fear Street: 1994 - Part 1 of an R rated adaption of RL Stein young adult novels with all three movies airing on successive Fridays.  I friggin loved this flick!  From the story, the gore, the soundtrack!  I just loved everything about it! Go out of your way to watch this bad ass flick!
No Sudden Move - The HBOMax Steven Soderberg flick with Don Cheadle and Benicio Del Toro.  It's a crime thriller set in the 1950's.  I really enjoyed it, it's worth your time.
Black Widow - I was going to take the kids to the movies, but it was cheaper to buy it on Disney Premier.  It was a decent flick but nothing spectacular.  It mostly established her sister as a character going forward.
The Tomorrow War - The Amazon Prime original with Chris Pratt traveling to the future to fight a war.  Cool concept but it became a very predictable story.
Sword Of Trust - Comedy with Marc Maron, a pawn shop owner where someone brings in a sword and documentation that allegedly prove that the South won the Civil War.
Fear Street: 1994 - Kick ass trilogy of movies inspired by the RL Stein Fear Street book series, except these are Rated R.  I really enjoyed all three movies they were so well done and if released I will definitely buy.
Fear Street: 1978 - My favorite of the three films. Set at a summer camp, great throw back to 1980's slasher flicks
Fear Street: 1666 - A great conclusion, I hope we get more movies about the other killers we saw but didn't get all their backstories.
Gunpowder Milkshake - Cool John Wick style action flick about a hit woman, her mom, some librarians, and the little girl they want to protect.  It's on Netflix and it's well worth your time.
Posted by Michael J. Labbe at 9:50 PM No comments:

Very short movie month for me.  I had a lot of stuff going on.

Flipped - neat love story set in the 1950's between two middle schoolers where story is told from the vantage point of both characters.  Directed by Rob Reiner

Cruella - We saw this at Pride's Corner Drive In, it was fantastic!  I was genuinely surprised how much I enjoyed the film.  Kate wanted to go and see it, Addison loved it!

Wrath of Man - Guy Ritchie action, thriller, mystery flick with Jason Statham in the title role.  He kills a lot of people, it's pretty great!

Posted by Michael J. Labbe at 9:33 PM No comments:

Yo!
I really can't believe the last day of June is tomorrow.  The first half of 2021 has just rocketed right by, whereas it seems 2020 dragged endlessly.  We are still feeling the effects of the pandemic, in different ways now.  Maine will end it's State of Emergency tomorrow, June 30th, the US/Canada Border is still closed to non essential travel, and my AEW Dynamite show has been pushed back fourth time to October 27, 2021 more than 18 months after it was originally supposed to happen!
I had a busy week last week, they've all been busy with my new position at work.  I'm not complaining, mind you, because this is what I wanted I'm just still adjusting to everything.  I went to two live wrestling shows last week, Friday & Saturday and they were both excellent.  Friday was the Limitless Dojo Student Showcase and Saturday was the return of a full Limitless show.  I shed tears twice Saturday night because of the rasslins.
My buddy Brandon started a new short from podcast Break Time With Brandon which you can find on Spotify and soon other platforms.  The episodes are short, about 10 minutes each, and it's him reflecting on his thoughts.  A recent episode he talks about the time he was driving over the mountains through the night and lost cell reception so his stream stopped.  He turn on the radio and discovered Coast to Coast, and not to my surprise, he loved it.
It got me thinking back to my early days of dispatching at the city of Augusta in 2001 - 2003.  At that time we didn't have cell phones, tablets, or any electronic devices, hell we didn't have a TV or even internet on the computers in the center, it wasn't secure.  I was assigned to the midnight shift and from midnight to 630am I was all alone in the center.  All I had was a radio and used to listen to Coast to Coast every night.
I first discovered Coast to Coast in 1996 when I was in high school and worked the overnight at the gas station in the travel plaza on the Maine Turnpike.  I listened to it occasionally over the years after that but it was while working those early dispatch years that I became a regular.
For those that don't know, Coast to Coast is a late night talk show style format with guests and listeners calling in, but the topics are paranormal and conspiracy based.  Another cool aspect about the show that I dug for another reason was the opening theme was the song "The Chase" from the soundtrack to the movie Midnight Express, which also was the theme song used by one of the greatest wrestling tag teams of all time, The Midnight Express.
I have listened to Coast to Coast occasionally since then, they have a podcast version of the show, but it's not complete episodes unless you want to pay a monthly subscription fee.
Until Next Time!
Posted by Michael J. Labbe at 9:05 AM No comments:

Holy cow what a busy month it has been for me.  I've had so much going on at work with busy days, working overtime on the floor, driving 200 miles one way to conduct interviews for an operations manager at the Houlton center.  Driving back the next day after interviews, getting home late, and then driving back up to Medway, about an hour south of Houlton, for a weekend of camping.

We had an awesome weekend with our friends The Brown's, and their daughter who is 5 months younger than Wesley.  We went to Pine Grove Campground and each rented a cottage.  We had some great pizza, lots of camp fires, and lots of relaxation.  The weather was perfect!!

I haven't had much time to watch TV, but then again there is really nothing on that I want to watch.  I was really enjoying Jupiter's Legacy, but then it was cancelled.  I know they are doing another Millarworld show on Netflix, Supervillians, it annoys me that they cancelled this especially as they had a dick move cliffhanger ending. Other than the new Loki show I'm not enjoying a whole lot right now.

Next month I'm taking my son to  New Hampshire for the Cup race, he's all about NASCAR right now and this will be his first big race.  I've gone to about a half dozen in the past myself.   My dad is going as well, so it'll be a fun day at the racetrack.

I bought my wife and I front row center tickets to "Friends: The Musical Parody" for this November at the State Theatre in Portland.  Should be a fun time, my wife loves her some Friends. I need to find something to do with my daughter this summer.

I've got two concerts in August and AEW in Boston in September from last year that were rescheduled for this year.  Guns n' Roses at Fenway and Kiss in Bangor!